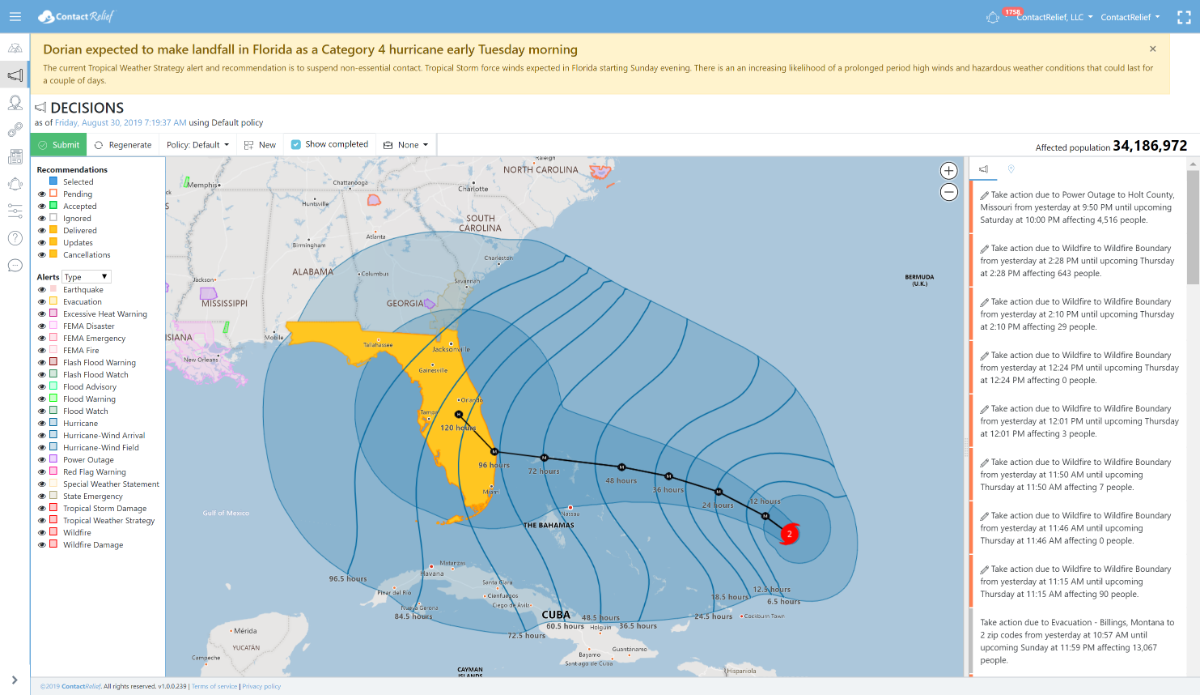 Hurricane Dorian Intensifies as Florida Braces for a Category 4 Landfall

Hurricane Dorian is now at Category 2 strength and expected to reach Category 4 before landfall in Florida early Tuesday morning.

ContactRelief has issued a Tropical Weather Strategy alert and recommendation for parts of Florida. Our current recommendation is to suspend non-essential contact through close of business Saturday 9/7.  An extension of this recommendation may be required in certain heavily hit areas if the storm makes landfall as predicted. In areas with no damage or less damage, contact may be resumed early.

Dorian is expected to make landfall as a major hurricane early Tuesday morning at or near Category 4 strength.  Residents are actively preparing for the upcoming storm.  As the storm nears landfall, these preparations will intensify further.  You can promote and protect your brand image implementing a proactive customer care policy now.  You should consider messaging opportunities before and after the storm, suspension of non-essential contact, financial relief programs or other services, creating specialized IVRs and trained agent groups to handle interaction with disaster victims, and routing calls based on the caller's location.

Dorian has now reached Category 2 strength and is expected to intensify further to Category 4 within 48 hours.  Maximum winds speeds at 140 MPH put Dorian well above the 130 MPH wind speed for a Category 4 hurricane.  Winds speeds at landfall are predicted to be 130 MPH.

The National Hurricane Center reports in its Friday 5 AM AST forecast discussion that Dorian will slow as it nears Florida and that it may linger for a protracted period at hurricane strength after landfall.  Wind damage from Dorian will likely be severe and a protracted suspension of contact for damaged areas will likely be required.

There hasn't been a lot of new data since the Hurricane Hunter planes departed Dorian several hours ago.  The convective pattern on infrared satellite imagery has been nearly steady state, although the latest Dvorak estimates from TAFB and SAB rose to T5.0/90 kt.  These estimates, combined with the earlier aircraft data, support maintaining an initial intensity of 90 kt.

Dorian's heading is very gradually turning toward the left, with the latest estimate northwestward, or 320 degrees at 10 kt.  Dorian is now being steered between a mid-tropospheric high centered near Bermuda and a mid-/upper-level low located over the Bahamas.  The high is expected to expand westward, with a blocking ridge becoming established over the western Atlantic during the next several days. With the exception of COAMPS-TC and HMON, the other reliable models are in excellent agreement through day 3, with Dorian turning westward south of the ridge and moving near or over the northernmost islands in the Bahamas Sunday and Monday.  After day 3, steering currents collapse as a break develops in the ridge, and Dorian will likely slow down considerably as it approaches the Florida peninsula.  There is more spread among the deterministic models and their ensemble members during that time, with disagreement on exactly when and where Dorian will turn northwestward and northward on days 4 and 5.  That being said, the tracks of the simple and corrected consensus models on this cycle did not warrant much change to the official NHC forecast, with perhaps just a slight southward adjustment on days 3 and 4.  The biggest concern will be Dorian's slow motion when it is near Florida, placing some areas of the state at an increasing risk of a prolonged, drawn-out event of strong winds, dangerous storm surge, and heavy rainfall.

The upper-level low to the west of Dorian continues to impart some southwesterly shear over the hurricane, which has prevented it from strengthening rapidly.  However, Dorian is expected to enter a more favorable upper-level environment during the next 24 hours, which should allow its structure to become more well developed.  Although overall the environment ahead of the storm appears conducive for strengthening, some models (in particular the ECMWF) suggest that some northerly shear could come into play while Dorian moves through the northwestern Bahamas, and for that reason the NHC official intensity forecast is not quite as bullish as the HCCA, Florida State Superensemble, and HWRF models.  Still, Dorian is forecast to become a dangerous major hurricane later and maintain that status as it heads for the northwestern Bahamas and the Florida peninsula.

1. A Hurricane Watch is now in effect for the northwestern Bahamas, where the risk of life-threatening storm surge and hurricane-force winds this weekend has continued to increase.  Residents should begin to execute their hurricane plans and listen to advice given by local emergency officials.

2. There is an increasing likelihood of a prolonged period of hazardous weather conditions that could last for a couple of days in parts of Florida early next week.

4. Regardless of the exact track of Dorian, heavy rains are expected to occur over portions of the Bahamas, Florida, and elsewhere in the southeastern United States this weekend and into the middle of next week.