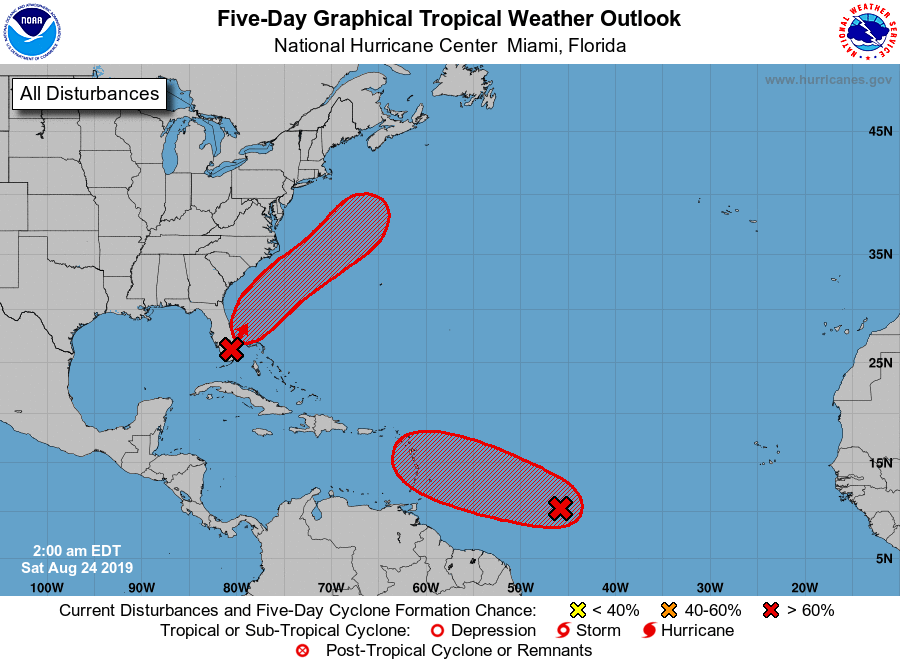 The expected area of disturbance is now forecast to be further off-shore but heavy rains are still possible for the Florida peninsula.

For the North Atlantic...Caribbean Sea and the Gulf of Mexico:

1. A broad area of low pressure located inland over South Florida is producing a large area of disorganized showers and thunderstorms that extends eastward over the northwestern Bahamas and the adjacent Atlantic waters.  Significant development of the low is unlikely today while it drifts northward over the southern or central Florida peninsula.  However, environmental conditions appear conducive for gradual development once the low moves off the east-central coast of Florida over the western Atlantic by Sunday, and a tropical or subtropical depression is likely to form early next week while the system moves northeastward offshore of the southeastern United States coast.

Regardless of development, locally heavy rains are possible over the northwestern Bahamas and the southern and central Florida peninsula through the weekend.  Interests in the northwestern Bahamas, the Florida peninsula, and the southeastern coast of the United States should monitor the progress of this system.  The Air Force Reserve Hurricane Hunter aircraft scheduled to investigate the system this afternoon could be postponed if the center of the low remains inland.  Another aircraft is scheduled to investigate the system on Sunday.

2. Showers and thunderstorms associated with a small area of low pressure located about 950 miles east of the Windward Islands are showing some signs of organization.  Environmental conditions appear conducive for additional development, and a tropical depression is likely to form during the next day or two while the low moves westward to west-northwestward at 10 to 15 mph.  Conditions appear less favorable for development when the low reaches the Lesser Antilles and eastern Caribbean Sea by the middle of next week.