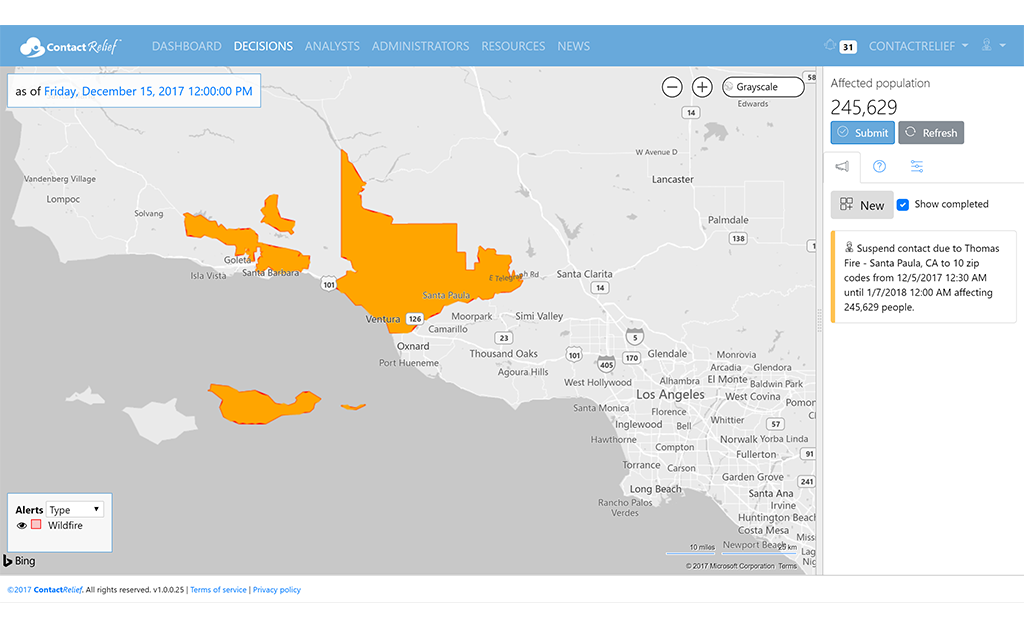 ContactRelief recommends continued suspension of contact for consumers in the Thomas fire area.

ContactRelief is making public its recommendations made to ContactRelief subscribers, Friday, December 15th, 2017.

ContactRelief recommends continued suspension of contact with California consumers affected by the Thomas fires. To obtain the list of the affected zip codes, become a ContactRelief subscriber.

The Thomas Fire, the 4th largest wildfire in California history, continues to wreak as officials are concerned that a return of the powerful Santa Ana winds will accelerate the fire's expansion. One firefighter was reported to have died Thursday while battling the blaze. The fire has burned more than 252,500 acres.

Mandatory evacuations continue for areas of Santa Barbara County, Ventura County, and the City of Ventura. New mandatory evacuation orders were issued for areas near the city of Filmore as the fire continued to move. CAL-FIRE officials say the fire is now 35% contained. Full containment is not expected until early January, 2018.

The extent of the fire and impact on the surrounding communities is hard to overstate. Most Venture County schools were closed this week due to the fire. All Santa Barbara County schools are closed through January 2, 2018.

ContactRelief's recommends continued suspension of contact with consumers affected by the Thomas Fire until further notice. Over the last three days, ContactRelief has adjusted its recommendations as evacuation orders were issued and lifted. To cover the new evacuation areas, we have added two zip codes to the suspension zone.

Lilac Fire No Longer a Threat

On Tuesday, December 12th, ContactRelief recommended resumption of contact with consumers affected by the Lilac Fire. Today, we end our coverage of the Lilac Fire as this fire is almost fully contained and no longer represents a direct hazard.