...DORIAN MOVING STEADILY WESTWARD... ...WATCHES WILL LIKELY BE NECESSARY FOR PORTIONS OF THE LESSER ANTILLES ON SUNDAY...

Interests in the central and northern Lesser Antilles should monitor the progress of Dorian.

DISCUSSION AND OUTLOOK
----------------------
At 1100 PM AST (0300 UTC), the center of Tropical Storm Dorian was located near latitude 10.9 North, longitude 50.4 West. Dorian is moving toward the west near 14 mph (22 km/h). The tropical storm is forecast to move generally west-northwestward at a similar forward speed for the next several days. On the forecast track, Dorian is expected to be near the central Lesser Antilles on Tuesday.

Maximum sustained winds are near 40 mph (65 km/h) with higher gusts. Gradual strengthening is forecast during the next few days, and Dorian could be near hurricane strength when it approaches the central Lesser Antilles on Tuesday.

Tropical-storm-force winds extend outward up to 25 miles (35 km) from the center. 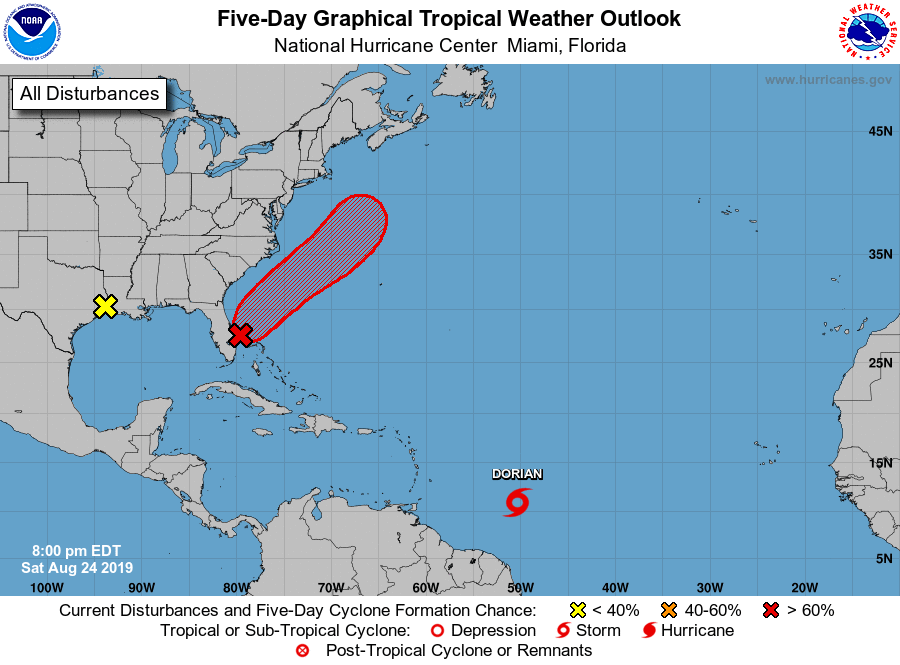 For the North Atlantic...Caribbean Sea and the Gulf of Mexico:

1. A trough of low pressure extending from the coast of south-central Florida northeastward over the western Atlantic for a few hundred miles continues to produce a large area of disorganized showers and thunderstorms.  Environmental conditions appear conducive for gradual development during the next few days, and a tropical or subtropical depression is likely to form early next week while the system moves northeastward over the Atlantic, offshore of the southeastern United States coast.  Interests along the coasts of South and North Carolina should continue to monitor the progress of this system.  An Air Force Reserve Hurricane Hunter aircraft is scheduled to investigate the system on Sunday, if necessary.

2. Satellite and surface observations show that the trough of low pressure over the far northwestern Gulf of Mexico has moved inland over the Upper Texas coast and western Louisiana.  Although further development of this system is not expected, it will likely bring locally heavy rains to portions of Louisiana and eastern Texas during the next day or two.  See products issued by your local National Weather Service office for additional information.