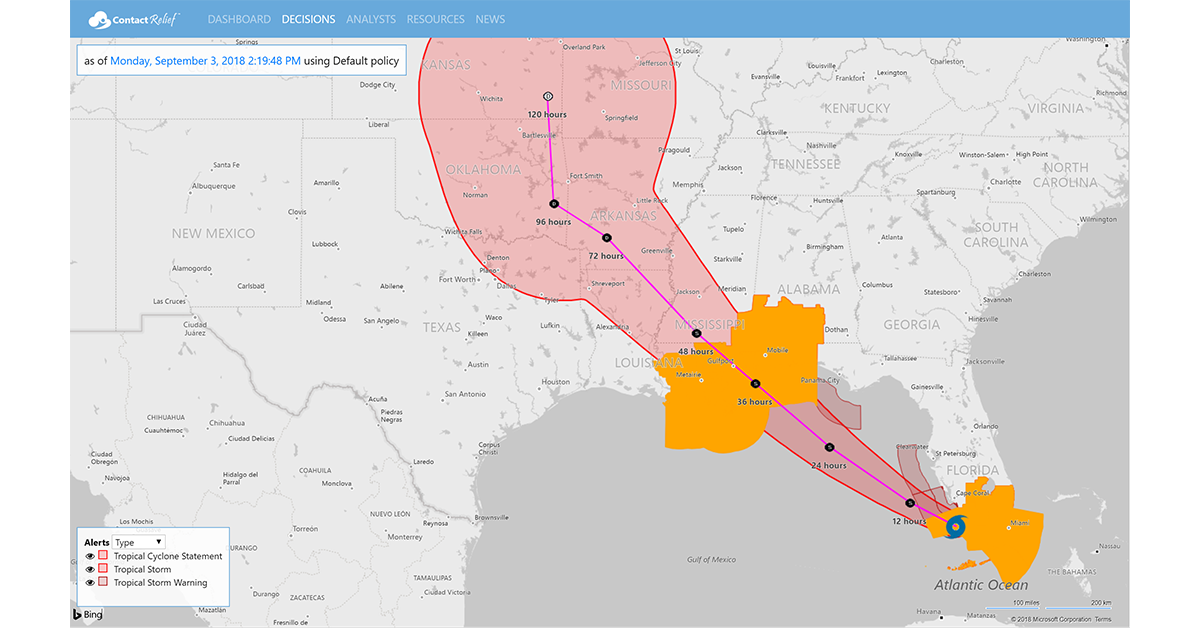 Tropical Storm Gordon Forms in the Gulf of Mexico

ContactRelief is making public recommendations first made to subscribers on Monday, September 3rd, 2018. Tropical Storm Gordon is expected to strengthen before making landfall Tuesday on the central gulf coast. ContactRelief recommends suspension of contact with residents in the Tropical Storm Warning areas for Florida, Alabama, Mississippi, and Louisiana. To obtain, the complete list of Zip Codes for the affected areas, become a ContactRelief subscriber.

As expected, the tropical disturbance bringing rain to Florida has now strengthened into Tropical Storm Gordon. The National Hurricane Center says that the center of Gordon is located near latitude 25.3 North, longitude 81.3 West, moving toward the west-northwest near 16 mph (26 km/h). Forecasters at the NHC said "On the forecast track, the center of Gordon will emerge over the southeastern Gulf of Mexico by early afternoon, reach the warning area along the central Gulf Coast by late Tuesday or Tuesday night, and move inland over the lower Mississippi Valley on Wednesday."

Tropical Activity in the Atlantic On The Rise

After remaining quiet for three months, tropical activity is on the rise in the Atlantic. In addition to Tropical Storm Gordon described above, Tropical Storm Florance is located near latitude 18.0 North, longitude 37.5 West, moving toward the west-northwest near 16 mph (26 km/h). Forecasters contemplate two scenarios for Florence. The storm may eventually turn north and head up the open Atlantic or stay on its north-westerly or even a more westerly path and threaten the eastern seaboard of the United States the second week of September.

Forecasters also expect additional waves of disturbance to appear off the coast of Africa in the coming days keeping the pipeline full of potential threats during peak hurricane season.

Tropical Activity in the Pacific Continues

Tropical activity continues to threaten Hawaii in the Eastern Pacific with two active storms. Category 3 Hurricane Norman is located near latitude 19.0 North, longitude 134.6 West, moving toward the west-northwest near 20 mph (31 km/h). On its current forecast track, the storm is expected to weaken and pass north of Hawaii.

Hot on its heels is Tropical Storm Oiliva located near latitude 17.1 North, longitude 114.2 West. Forecasters at the NHC say that Olivia will remain a Tropical Storm over its 5 day forecast period.

The ContactRelief Disaster Decision Team will continue to monitor the development of these storms and issue additional advisories as warranted. To obtain, the full list of affected ZIP Codes under Tropical Storm Watch, become a ContactRelief subscriber.


With ContactRelief's Disaster Decision Engine, your company can avoid disasters by shaping the customer experience.

The next disaster is on its way. Become a ContactRelief subscriber and keep your company protected from disaster. Our full recommendations consist of the areas to be suspended and the list of zip codes covering these areas. With minimal effort, your company can quickly implement a solution that protects your company and its customers. As we say at ContactRelief, "It's just smart business."