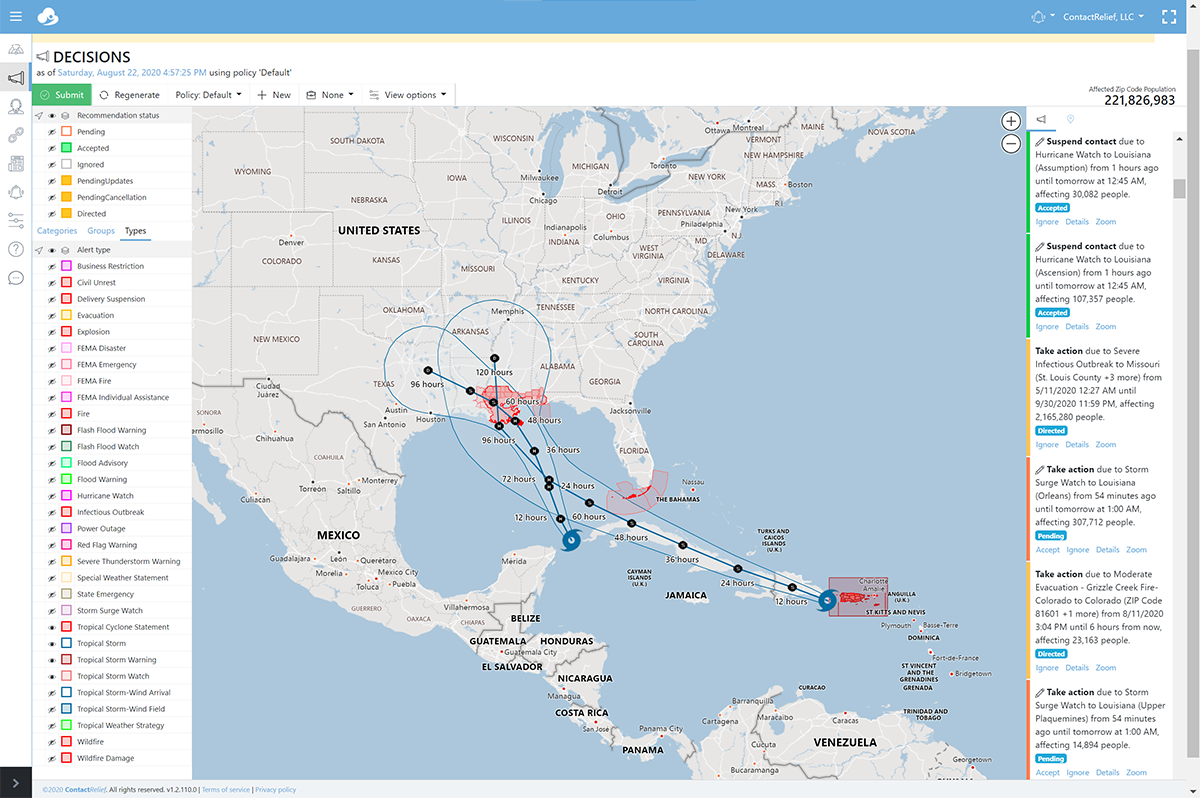 Prospective Hurricanes Marco and Laura expected to make landall with days of each other.

Key Messages as of 2020-08-22 from the National Hurricane Center for Tropical Storm Marco include:

1. Tropical storm conditions will continue over portions of extreme western Cuba through this evening. Heavy rainfall is also expected in the eastern portions of the Mexican states of Quintana Roo and Yucatan, and across far western Cuba, which could result in flash flooding.

2. Marco is expected to approach the central Gulf Coast as a hurricane on Monday. Hurricane conditions, life-threatening storm surge, and heavy rainfall are possible along portions of the Gulf Coast beginning on Monday, and Hurricane and Storm Surge watches have been issued. Interests in these areas should follow any advice given by local government officials.

3. Tropical Storm Laura could bring additional storm surge, rainfall, and wind impacts to portions of the U.S. Gulf Coast by the middle of next week. This could result in a prolonged period of hazardous weather for areas that could be affected by Marco. Interests there should monitor the progress of Marco and Laura and updates to the forecast during the next few days.

Key Messages as of 2020-08-22 from the National Hurricane Center for Tropical Storm Laura include:

1. Tropical storm conditions are expected to continue across portions of the U.S. Virgin Islands and Puerto Rico through this evening. Tropical storm conditions are also expected across portions of the Dominican Republic and Haiti, the Turks and Caicos, the southeastern Bahamas, and central and eastern Cuba through Sunday. Heavy rainfall is likely across these areas and could cause mudslides and flash and urban flooding through Sunday, with widespread river flooding possible in Puerto Rico.

2. Tropical storm conditions are possible over portions of the central Bahamas and Andros Island Sunday night and Monday, and in the Florida Keys on Monday.

3. The details of the long-range track and intensity forecasts remain uncertain since Laura is forecast to move near or over portions of the Greater Antilles through Monday. However, Laura is forecast to strengthen over the Gulf of Mexico and could bring storm surge, rainfall, and wind impacts to portions of the U.S. Gulf Coast by the middle of next week. This could result in a prolonged period of hazardous weather for areas that are likely to be affected by Tropical Storm Marco earlier in the week. Interests there should monitor the progress of Laura and Marco and updates to the forecast during the next few days.

As noted by the National Hurricane Center in their latest forecast discussions, the current storm tracks can and likely will change during that time.  Forecasters warned, "In fact, various ensemble members from some of the global models still show a potential risk to the coast anywhere from Texas to Alabama, and it's entirely possible that the volatile shifts seen in the models could continue.  That being said, the new NHC track forecast (for Marco) has been shifted significantly eastward and now shows the center of Marco reaching southeastern Louisiana in about 2 days, which is the scenario currently shown by the GFS, ECMWF, HCCA, Florida State Superensemble, and the TVCN multi-model consensus."

ContactRelief has issued Tropical Weather Strategy alerts and recommendations for the affected areas.  Contact centers should monitor the forecast track, wind field size, and arrival time of tropical force winds in the ContactRelief Command Center and take action if there is any deviation of either storm's forecasted track. Any impact of two hurricanes within a short time can be catastrophic but doubly so when the impact area is flood-prone Louisiana.