Tropical Storm Erick and then Flossie to Pass Hawaii

Flash Flood Watch issued for the Big Island of Hawaii as Erick passes to the south.

Both Tropical Storm Erick and Flossie are now expected to pass Hawaii will minimal effects. Our Tropical Weather Strategy alert expired Thursday.  Our current recommendation is to use your standard operating procedure.

Tropical Storm Erick will pass well to the south of the Big Island.  Gusty winds and enhanced rainfall are expected.  A Flash Flood Watch has been issued for the Big Island of Hawaii.

At 1100 PM HST (0900 UTC), the center of Tropical Storm Erick was located near latitude 16.4 North, longitude 155.8 West. Erick is moving toward the west-northwest near 13 mph (20 km/h) and this motion is expected to continue over the next couple of days. A turn toward the northwest at a slower is expected on Sunday. On the forecast track, the center of Erick will pass by around 175 miles south of the Big Island tonight.

Maximum sustained winds are near 65 mph (100 km/h) with higher gusts.  Rapid weakening is forecast to continue tonight, followed by gradual weakening Friday into the weekend. Erick is expected to become a tropical depression by Sunday, and a post-tropical remnant low on Monday.

Tropical-storm-force winds extend outward up to 105 miles (165 km) from the center.

Tropical Storm Flossie which was on a direct collision course with Hawaii is now forecast to turn northward before reaching the islands.

At 1100 PM HST (0900 UTC), the center of Tropical Storm Flossie was located near latitude 16.8 North, longitude 136.4 West.  Flossie is moving toward the west-northwest near 18 mph (30 km/h), and this general heading with some decrease in forward speed is expected through late Sunday.  On the forecast track, Flossie is forecast to cross into the central Pacific basin Friday afternoon.

Maximum sustained winds are near 70 mph (110 km/h) with higher gusts.  Gradual weakening is forecast to begin on Friday and continue through the weekend.

Tropical-storm-force winds extend outward up to 140 miles (220 km) from the center.

Tropical Disturbance in the Atlantic 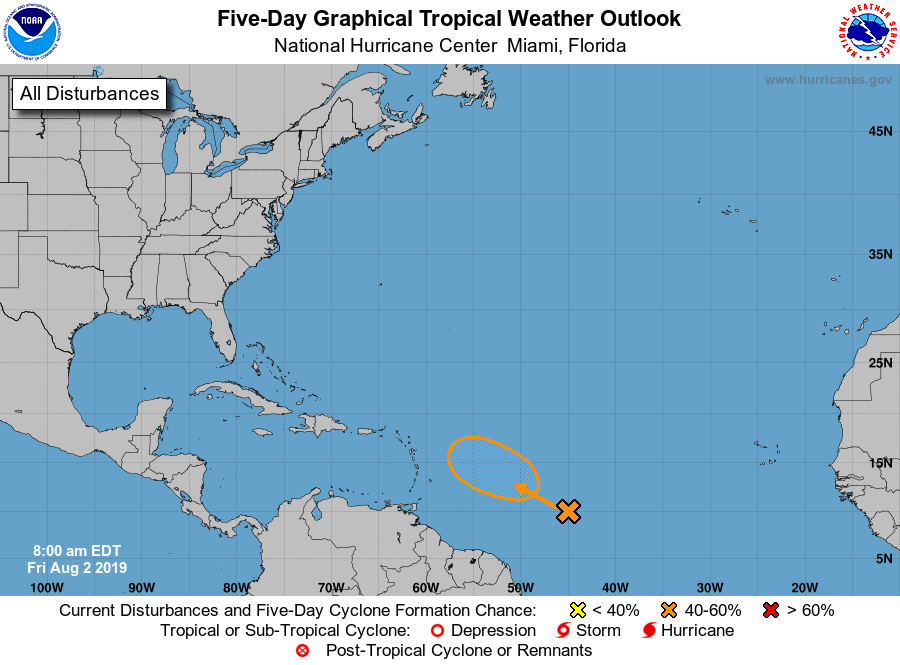 An elongated area of low pressure located over the central tropical Atlantic Ocean several hundred miles southeast of the Lesser Antilles continues to generate limited showers and thunderstorms. Some slow development of this system is possible, and a tropical depression could form well east of the Leeward Islands by early next week while the low moves west-northwestward at 10 to 15 mph. Upper-level winds are forecast to become less conducive for development as the system approaches the Leeward Islands Tuesday and Wednesday.